I’m not much for giving reviews, especially with my indecisivness. I’m not sure even how to come about with them, but I thought I’d give it a try.
Imogen Heap is by far one of my favorite artists. She originally came from Frou Frou, whos music is quite similar that I also enjoy. She sings various types of soothing songs, I wouldn’t quite say its pop but  she also has party music. The lyrics to her songs are normally quite simple but contain a good meaning behind them. They have a direct, simple and sweet point. Two songs I really enjoy of hers are Just for now and Headlock. Just for now is a simple soothing kind of song that deals with struggles with family around the holidays. Headlock is more upbeat, talking about how this person is to afraid to take a jump, get into a relationship because they’re overthinking and letting their head control their heart. The background music is so unique which I love about her. She creates different sounds on her own and mixes them together perfectly. She uses different sounds from pieces  of all sorts of shapes. Glass, bottles, nails, etc. I enjoy this artist very much, and I reccommend you to give Imogen Heap a listening sometime 🙂 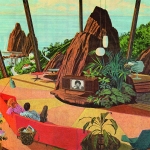 It’s like standing in an elevator. Stretching your neck, cracking it to the left, cracking it the right. Looking at your wrist watch, then up at the numbers. 3 . . . fade . . . 4 . . . fade . . . 5 . . . Tapping your foot and exhaling. It’s like pushing a shopping cart. Pacing the aisles. Where is the detergent section? Where are the bright, orange jugs of blue baby venom? You walk along the dotted white tile to the rhythm of the music played. Nodding your head as you scan row upon row upon row . . . It’s like sitting in the waiting room at the dentist’s office. Kids are building Lego towers and knocking them down with big yellow trucks. They’re playing Sandlot on VHS. The audio is muted so only the sounds of the children and the bells of the intercom music echo among the otherwise silent patients. It’s like being put on hold. You patiently await a much needed answer to all your problems, but you are glad the music has a nice vibe to it. It’s so retro, it sounds like things haven’t changed for the last forty years. Samples looped and hooked together so smoothly, repeating themselves until you almost want to imitate the rhythm vocally. The operator interrupts . . . “Hello?” Your mouth is closed.

Clocking in at only two-point-one minutes and five-point-three megabytes, Crimes In Blood is the shortest album in my iTunes library. I thought it fitting to review this right now as I wanted to review something in a very short amount of time. Vaccine is another one of them powerviolence bands who like to keep things fast and incoherent. The subpar sound quality and pure chaos are all intact and this album never lets go even for a second (which is 1/126th the length of this album). I have a feeling every member of this band has been abused in some way, whether it was their parents or a bully in elementary school or a restless chihuahua who kept them up at night or maybe one of them is diabetic and they order their fries with no salt at Wendy’s and they always get their order back with salt on their fries or perhaps they all have jobs as telemarketers who are constantly being ignored and are using their band as an outlet for their anger or maybe the vocalist of this band has never whispered a word in his life, maybe he was raised on a farm with a bunch of squealing pigs and he always had to scream and yell over the sound of the pigs squealing just so that he could ask a simple question, or there may be a chance that all of the band members got ripped off at a Denny’s and they made this album hoping one day the employees at that Denny’s would listen to it and discover that all the anger is directed to them and they will feel so guilty about their past actions that they’ll give all the members of Vaccine a free meal. Or maybe they’re angry because the world is angry. That’s basically what this album is. Pure rage. A thousand punches hitting you at a thousand miles per hour. I have played this album about fourteen times since I started typing this. If you like angry music that you can’t scrobble on Last.fm, check out Vaccine’s Crimes In Blood and die.

Written as I watch the Monster Ball at Madison Square Garden on DVD; An opinion from an non-Gaga fanatic.

Everyone’s so happy about it. I understand, I mean, it is Lady Gaga. And I can’t say I’m not enjoying it. To some extent. She has been talking more than she has been singing. And then they take you backstage as she strips off her over-the-top costumes(which, miraculously, don’t seem to be getting caught on anything. That was probably cut out). And all you get to see of that is her bare back. Not exciting, if you ask me.

The way my friend treats her, it seems like she’s got a bigger cult following than Twilight has. Gaga is God.

Well, in her own words, she’s Tinker Bell. You need to clap for her to live. So clap her little monsters shall. Clap as she strikes sexy poses whilst on her knees. Singing her speech instead of her songs. Randomly throwing in “Jesus” and saying it louder than every other word in the sentence.

Showing her teeth. She says she loves Michael because Michael loves everyone. But bisexuals don’t love everyone. Pansexuals do. So maybe people should be more like me(or thank God that they aren’t).

I won’t question the fantasized gaze my friend is giving my television. Even if it’s a little bit creepy, with his mouth hanging open and glassy eyes unrelenting. I know there are plenty of bands, people, and actors I admire.

I do wish I could have seen this live. It would have been exponentially more enjoyable and purposeful than seeing it on this DVD my friend bought. I’m just not into this women’s story or even music to fully appreciate watching the pre-recorded concert from behind a camera lens.

I was standing in the shower wondering what my first blog post on this site would be, and as I continued to ponder and ponder, the soap bar fell from it’s little soap balcony and made a tremendous clamor when it struck the floor of the tub. I almost made a mess in the shower I was so terrified. I was in the middle of scrubbing my face too. I could’ve gotten some in my eyes and I imagined what kind of sensations I would experience with burning eyes. One that makes you feel vulnerable to things like spiders in the corners of ceilings or a misplaced loofa, fresh for the slipping and tripping. What would I do then? Fall to my death of course. Anyway, I’m sort of just going on this weird tangent that no one in their right mind would skim through, so I’m just gonna get to the point I was gonna make (as insignificant as it may be): what I aim to do on this site is give my opinions on things. Reviewing music, movies, people, finding strange news articles, stuff like that. I like getting my point across.